On the third day of the Tepeyac Cultural Studies trip to Mexico City, we visited the Plaza de las tres culturas in Tlatelolco, and the Basilica de Guadalupe.
The Plaza de las tres culturas gets its name from the fact that the one space unites the ruins of Mexico-Tlatelolco, a colonial church, and modern high-rise apartment buildings. Tlatelolco was the sister city of Mexico-Tenochtitlan, and in ancestral times, there was the largest open-air market (tianguis) in the Valley of Mexico. The exposed ruins contain ceremonial centers, carved glyphs of the Tlatelolcan calendar, and the tecpan, the building from which the ruler (tlatoani) of Tlatelolco governed. Next to these ruins are two colonial buildings foundational to Mexican culture: the Franciscan church of Tlatelolco and the Colegio de la Santa Cruz, the first university of the Americas (today archive of the Secretariat of the Exterior). Modern high-rise buildings recall the economic growth of the mid-twentieth century. Over the years, the plaza has witnessed a number of events of seismic importance.
It was in Tlatelolco on August 19, 1521 that Cuauhtemoc, the last emperor of the Mexica people surrendered to Hernán Cortés and his allies the Tlaxcaltecos, who had joined the invaders in a war to defeat the Triple Alliance (a.k.a. the Aztecs). One of the ironies of that surrender is that the emperor had attended a school for indigenous nobles (calmecac) at the same site. Although the Spanish would in many ways displace traditional knowledge, it was here in Tlatelolco that cross-cultural research projects on native culture would actually preserve knowledge of traditional ways.
On this visit to the Plaza de las tres culturas, I had a conversation with a security guard, who had witnessed one of the plaza’s major historical events in person.
The guard had been present there on the evening of Oct. 12, 1968. At that time, he was a student in the “secundaria” (jr. high). He and his friends used to play soccer in the Plaza de Tlatelolco. The guard told me that he remembered on that day in 1968 that his mother would not allow him to play as usual. He stayed in the family apartment and watched as university students and professors gathered to protest against the national university’s (UNAM) policy of raising tuition.
He said that he remembered gunshots and that army trucks suddenly appeared. His parents would not let him go near the windows of their apartment. He told me how they killed hundreds of students there and then hid the evidence of the bodies from the international community. It was only two weeks before the Olympic Games of 1968, after all, and Mexico City had an image to protect. Together the gentleman and I even reminisced about the song of the Mexican rock band, el TRI, who said that the government was censoring everything, even music. Together we sang the lyric, “ya sólo va a poder tocar, el hijo de Díaz Ordaz” (now only Díaz Ordaz’s son will be able to jam). Díaz Ordaz was the president who ordered the arrest and massacre of the protesting students in the Plaza on the the night of October 12, 1968. This chance meeting with the security guard, who so generously shared his knowledge and experience, was one of the most memorable of the entire trip to Mexico City.
We toured the ruins of Tlatelolco, with special attention to the Tecpan, the indigenous seat of government, which continued to function in the sixteenth century, in cooperation with the Spanish colonial administration. Here also, we saw the remains of a temazcalli (sweat lodge), which was important for rituals, as well as for reasons of bodily health and balance. 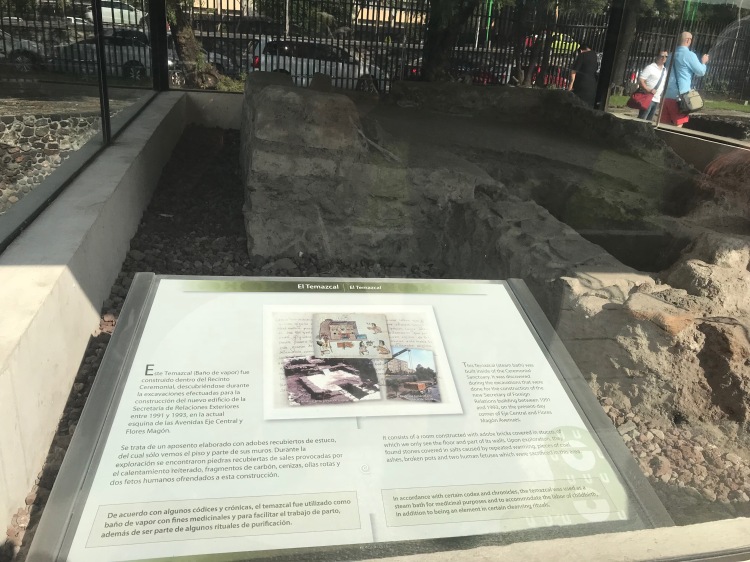 Another highlight of the Plaza de las tres culturas in Tlatelolco was the Colegio de la Santa Cruz, a site which relates directly to my current research. I will write about our experiences there in a future blog post. From Tlatelolco, it was on to the Basilica de Guadalupe.

The Basilica means different things to different people. A whole range of theories exists on the meaning of the site, from the progressive secular-minded views to a variety of nuanced religious perspectives.
This time, I focused on the Basilica grounds keeping in mind the basic concepts of indigenous urban planning.
For the Nahuas, the cultural group of Central Mexico before the Spanish conquest whose language was Nahuatl, the basic ingredients for a settlement were a hill with a nearby source of water. These elements joined to form a single concept: the altepetl (al-TEH-pet), alt = water, and tepetl = hill. The altepetl was the basic territorial, political, economic, and ritual entity of the Nahuas. Each altepetl shared common creation myths, deities, and narratives of their own past. Normally, the inhabitants of an altepetl lived around the foot of the hill, and ritual specialists ascended the top to perform ceremonies. Looking at the Basilica of Guadalupe at Tepeyac with those elements in mind helps me understand why the Marian devotion, with a distinctively indigenous character, was able to take root there first.
In ancestral times, there was no inhabited altepetl at Tepeyac. For more than four centuries, the Tepenac empire had ruled the valley (ca. 900-1320), and their altepetl was in Azcapotzalco (az-cah-poht-ZAL-coh). After the Tepenac empire came the Mexica and the Triple Alliance (Aztecs), who ruled from Tenochtitlan. During this change, Tepeyac passed from one empire to another. Despite the fact that Tepeyac has a natural spring, there was no established community there. The hill was on a peninsula that jutted out into Lake Texcoco. At the foot of that hill one of the causeways began that led to Tlatelolco, and from Tlatelolco to Tenochtitlan.
Tepeyac was on the edge of all previous empires in the region, and became a place that the Spanish watched, sometimes with suspicion (Bernardino de Sahagún) and sometimes in wonder as the Guadalupe devotion unfolded there in the sixteenth century. As we walked around the grounds of the Basilica, we saw the incorporation of native concepts of beauty. In keeping with the importance of flowers in indigenous beliefs, as conduits of cosmic energy that reveal beauty and truth, the whole area around the hill of Tepeyac is in bloom.
My wife Olivia went on a flower hunt around the hill.

Plumed serpents adorn the hillsides of Tepeyac. It was fascinating to come full circle, seeing the same plumed serpent motif that had been in Teotihuacan, here openly paired with a Christian pilgrimage site. Theories about about how the syncretistic combinations of indigenous and Christian beliefs abound (from Jacques LaFaye to Louise Burkhart, Stafford Poole and more). However, at the foot of Tepeyac that day in June, with the hundreds of pilgrims there from all over the world that day, I set those interpretations aside for a moment. Instead I observed the reverence and sincerity they displayed.

Following the importance of water in the altepetl, the plumed serpents are fountains, fed with water from under the hill. At the foot of Tepeyac hill, there is also a chapel built around a well (El pozo de los indios).
You never know who you are going to bump into. As I was walking along near el pozo de los indios, I heard, “Excuse me, professor. I think I saw you speak at Cal State Dominguez Hills. How are you?” I turned and greeted a young man who remembered a talk that I had given at that university about six months earlier. He gave me a hearty handshake. Small world. He was dressed in the white alb of an altar server, and was on his way to assist at mass in the Basilica. That meeting reminded me of the importance of Tepeyac for visitors from the US, and from all over the world.
In the colonial period, this space was outside of the city center, where the Spanish colonial administration exercised its power. It was here on the edge of the capital that native peoples developed their own approaches to Christianity, with effects that reverberate through the centuries. Whether one believes in miracles or not, there is no denying the larger-than-life proportions of Guadalupe as a cultural icon.
In spite of the controversy surrounding the site and the image of Guadalupe on the tilma inside of the current Basilia, Tepeyac has become a cultural and spiritual altepetl for Mexico and beyond. Millions of pilgrims come to the site every year, so many that the government closes the street leading up to the entrance (Calzada de los Milagros) to vehicular traffic every December 12. By the time we had finished touring the Basilica, it was 4pm. I was thrilled to learn that the tour group was still up for another adventure, and made a special request. 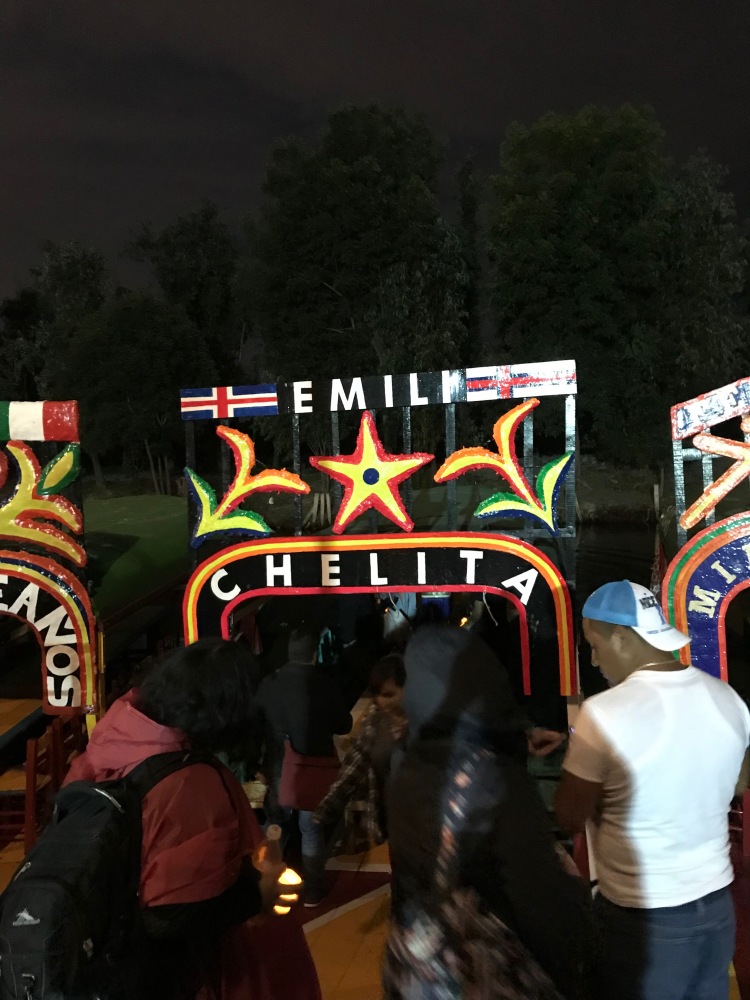 The decision to go to Xochimilco was spontaneous. Knowing that the Xochimilco gardens were far from our lodgings in the north of the city, we had not officially planned it in the itinerary. Yet the group was having so much fun and was excited to see the canals that are the waterways that once filled the entire city. We had to go. After visiting the Basilica, we gathered our energy, called two ubers and made for the south. It was rush hour and it took us 90 minutes to arrive. When we reached the launching point, all of the vendors had gone home. But the boats (trajineras) and a few of the men who push them, were still there. Two gentlemen got us a trajinera and even a cooler with beer and bottled water. It was the like catching the last train! We had barely made it.
We pushed out on the water, and floated on the canals for an hour. We all shared reflections on what we had learned on the trip. There was no doubt in our minds that before there was New York City, and that before Europeans were able to imagine the Americas, that Tenochtitlan was the major metropolis of the Western Hemisphere. Its size, economic importance, and cultural impact remain with us today.
Here is what Darrick Taylor (Ph.D. History) had to say about his experience in Mexico City:
And as far as what I learned?… It will take me months to unpack all that I encountered and learned on this trip to Mexico City, as well as the warm and memorable times that my wife and I spent, reconnecting with old friends and making plans to return.

If you are interested in subscribing to this blog, the follow button is at the bottom of this screen. On the main menu, you can also follow by clicking the three small dots in the upper-right-hand corner.